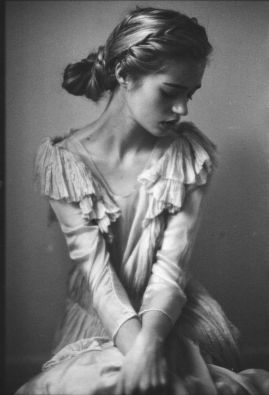 I don’t plan to cry when he leaves—that’s not the girl I am at all—but it sneaks up on me when I put my head down in the crook of his neck. His shirt is so soft and it strikes me hard and fast that no one is going to be here to tuck me in for a while.

It wasn’t that long ago that I didn’t have that anyway, so I’m not sure how it came to pass that something I went a lifetime without could become such a strong current, but there it is.

“Every woman has daddy issues,” he told me once, smirking, teasing me. And I’ll confess that daddy issues are perhaps a part of what this is, but to isolate it to just that is to diminish it.

Augustus is hard on me, exacting about the distances I like to hold between myself and others.

Well, not others, actually. Just him.

From the moment I first saw him again in the hospital—now over a year ago perhaps—until now, he has been unrelenting in his demands for proximity. Because I often see him as more vulnerable than I am, or at least did then, I acquiesced.

Augustus outmaneuvers my natural talent for aloofness by taking Lily-known shortcuts; he arrives at my destinies before I get there.

Sometimes this is literal, as when I get forlorn at day’s end, as I tend to do, and go out to circle the lake, only to find him already waiting there, with the shawl I invariably forgot to take.

Other times it is nuanced, as when I suffer worse fits of mood and won’t rise from bed. He fills the house with the melancholic sounds of Max Richter, evoking tears I didn’t want to shed, then comes in with a warm washcloth for my face.

“Stop,” I say, as he runs the cloth tenderly over my cheeks. Even though it feels heavenly, I find myself reluctant to abandon my misery. “Why do you do that?”

“I want to instill in you a learned helplessness,” he responds, candidly.

So when he tells me he is leaving for a couple of weeks, I assume he already knows I have been contemplating time in the house without him, and when he says he will be going dark—meaning no contact—I conclude it is to test the efficacy of his teachings.

The first few days he is gone I experience his absence more profoundly than seems reasonable. I find myself wanting him to call, which he doesn’t, and I become acutely aware of how fully he has infiltrated my existence. The realization makes me uniquely uncomfortable. “Like an incubus,” I decide.

My mind becomes busy with unraveling the full extent of his experiment. How to defy it. I stay up late writing letters to my future self, and begin exploring farther the woods beyond the house. As days pass, I exhilarate in feeling the fortitude of my body, the sensuous chill of the cold mountain air on my under-clothed skin, the familiar happiness of my own company.

By the time Augustus returns I’ve become habituated to life without him. I tiptoe past whatever room he occupies, in hopes of not being called to his side. It gives me a strange feeling of power, this secrecy, this independence. And it feels good.

I continue my walks in the woods, now laughing with an old man whom I often meet on the little bridge bordering the waterfall. His eyes light up as I ascend. I imagine him lonely, and feel an untethered tenderness towards him. “Here she comes!” he calls, as if we actually know each other.

One day it is stormy and he teaches me how the sound of thunder bounces off the walls of the canyon, so that one looks for lightning in the wrong direction.

On my way back, the rain starts. I break out in a run and return home breathless, invigorated. The house is so quiet I believe Augustus gone. I seek out the shelter of my bedroom and secure the clasp on its door, only to turn around to find him there, within its confines.

This scream I emit is loud, full of far more expression than the situation necessitates. I guess I’ve been holding some other things down in there, too, and now they want out.

Augustus rolls his eyes. “Ever the Shakespearean tragicomedy with you,” he says.

I suspect he intends it as an insult. But I like it.

“You want to tell me what’s going on?” he inquires.

“What?” I return, stalling.

“Well, right now, it is raining out. Hard. The air smells good. There is mud on my shoes. And there is a man skulking around in the shadows of my bedroom,” I offer.

I want to tell Augustus that being obtuse, vexatious though it may be, is actually my favored and intended route not only for tonight, but for many nights to come.

I start at the suddenness, the harshness of his voice, then try to collect myself. I am already sensing this exchange will not end well for me.

“Offering my thoughts up for your evaluation is not going to be advantageous,” I tell him, with rather striking, if absurdly presented, honesty.

“I’ll be the one to determine that. Now move that twisted little tongue of yours and make words for me.”

I squeeze water from my wet hair directly onto the floor. It mixes with the mud I’ve tracked in and makes little brown puddles on the floor.

His eyes remained fixed on me, and when my gaze again returns to his, he raises his brows in a look of hostile expectation, directs an impatient chin tilt at me.

“I guess maybe I feel as if you don’t really know me,” is what comes out, completely unplanned. “You know, like as if you were just some man who happens to live in the same house as I do.”

This is a variation of the truth, but it’s credible because the theme I’ve put forth is legitimate.

Exempting Augustus, there is an obscurity I’ve been allowed to harbor safely a long time. I sometimes speculate that it is the bridge between the girl I was and the woman I became, and that my very strength is derived it.

But despite its virtues, it has taught me very little about the subtleties of human interaction.

I guess that’s why the way Augustus occupies my room in this moment is misconstrued. A woman of greater sensitivity, more refined insight, might know he is angry, like very angry, but because his bearing is so momentarily placid, I somehow perceive, wrongly, that what I’ve said is acceptable, and a certain relief overcomes me.

I turn to my dresser and idly organize the train tickets that are collected there. I realize I am thinking very specifically about Jack, whom I also loved, and who never tried to step in farther than was welcome, who actually reveled in the unknowing. Why did I not end up with him again?

But before I can work out the calculus of that equation, Augustus grabs my arm and turns me to him. His face terrifies me.

“You are not allowed to say I am a stranger to you,” he hisses. “Do you understand?”

It seems a preposterous thing to have said. Not allowed? Aren’t I, at day’s end, to do exactly as I please? And what difference would squelching the utterance of it matter, if the truth were immutable?

I don’t answer, just give this blank stare that I’ve developed in his absence.

“Damnit Lily! Knock it off with that vacuous expression. I’m not buying it for a second.”

Even if I wanted to change my expression, I’m not sure that I could without it resulting in tears. At first I don’t understand the reason for this, but then it hits me: I don’t like Augustus yelling at me. It hurts.

And fuck it all if he isn’t reaching me again, without even knowing it.

2 thoughts on “on unlearning”