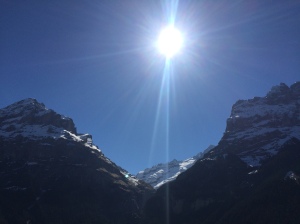 It’s because she is young, epically speaking.

Or at least not dead, anyway.

Also because none of it seems to carry with it the quality of being quite real.

She can’t track when or how that started, just knows that at this point it seems to be increasing exponentially. The unrealness. Her somehow existing as an entity of different dimensions than the rest of the world she inhabits.

It is for this reason, relatively well-founded, that she pulls the antics she does.

“Help me!” she calls to her son, whom she’s already coached through the window.

He looks at her. His technique was to straddle the window and then use his arm strength to lift himself to its other side. Hers for some reason is to hang her head and entire upper body off its ledge, her legs swimming wildly in the air behind her.

And with that, she loses her grip and falls through the window, landing, in fact, on her head.

Later, in Paris, she’ll be fascinated with her bruises. But right now, here, in the Alps, they’ve yet to surface. She stands, dirt smudges all over her face, giddy from absurd adventure.

She and her son are now on the roof of the highest, albeit abandoned, hotel in a small mountain town in Switzerland, breathing in the fresh morning air. This after taking the stairs as far as they could, and finding the access restricted.

“One day you’re going to get caught,” an old lover once told her. “And I’m going to be there for you when that happens.”

When she asked him why he thought she’d get caught, he cited the law of averages or something, rather than indicating that her behavior was wrong.

It was the little things that meant a lot.

Delilah looks at her son, Django. He is standing on the roof’s edge, smiling beatifically. He was reluctant to come on this mission with her, hemming and hawing about its legality, but now already she perceives the transmission was successful.

In a little over a year, Django will write his college essay on creating adventure when life falls short of delivering.

By then, Delilah will need the reminder.

One thought on “limitless”