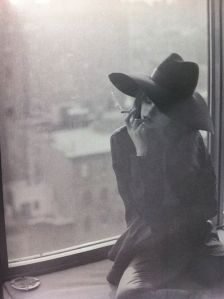 As an adult, all of the memories she has about him fall under one simple category: Sad Lessons on Life & Love.

Still, as a child, there was Daddy. Bringing her presents and leaving her notes in his left-handed scrawl, each one confirming how absolutely wonderful she was. Feeding her on his oration and tucking her in and pulling her body out of the tub. Conducting audio interviews with her and transcribing her stories and filming her. Filming her. Filming her.

A child was never so adored.

Once, he went away on a long business trip and she sat at school and missed him and crossed off the days until his return on her calendar. There was no delight in anything in his absence. It was all just one long spell of patient misery.

“May I go with you to the airport to pick him up?” she asked the morning of his homecoming.

“School,” Mum answered, pointing to the back door, which led across a large vacant field to the bus stop.

“I could miss school,” she suggested, despite an awareness of its being fruitless.

In her house, there were three women that orbited her father. Two daughters and a wife.

Of these three, she realized much later, her mum was the biggest child of them all. Needed his attention the very most, though was perhaps the least likely to receive it.

That day, during morning recess, she sat on top of the jungle gym and announced to her girlfriends, “I’m not going to be at school for a long time.”

“Why?” they wanted to know.

“Because I’m going to be very, very sick.”

From there, she went straight to the nurse’s office and developed a fever of 104.

Without meaning to, she went a little too far. There were chunks of time that were forever lost, and her overheated body ate small holes in the enamel of her surfacing teeth.

When the fever finally broke she opened her eyes to find herself in her parent’s bed in the dark.

By then, her mother was, predictably, gone.

“Dad?” she called, feeling his presence.

And there he was.

In the days that followed, her body woke and slept in irregular patterns. One night her father was missing from her side, and she wandered outside, feeling the stringy weakness of her legs. The clinging stickiness of her nightgown.

She found him under the big willow tree on the farthest corner of their property, crying.

“Please don’t be sad,” she whispered.

He wiped his face with the back of his hand and she cuddled up next to him.

“I’m not very good at holding my family together,” he told her, as her heavy eyes fell, and his voice broke as he said it.

Life carried on. She returned to school. Even from miles and miles away, she could feel, quite largely, how much he was pretending. Sometimes in the middle of her lessons, she was struck by loving him so much that it hurt.

One morning at recess, she invited herself to play King of the Mountain with the boys.

“You can’t play. You’re a girl,” Robbie Eggers told her.

She had a very small crush on Robbie Eggers. Even so, she pushed him as hard as she could in the stomach, and watched in wonderment as his body careened down the hill’s steep side.

And from then on, she was in.

At first the boys were timid with her, perhaps, but her lack of restraint soon earned her a solid place in the game. She became more and more drawn to the physical sensation of brute force. And when not at recess, she spent long amounts of time in the girl’s bathroom stall with her pants down, evaluating her myriad of bruises.

One day a boy’s arm broke, mid-play. And as a twisted result, the group was sent to the principal’s office, where they were told they would receive a paddling.

The principal sportingly removed the terrifying paddle from its shelf, looking a bit the cricketer.

And one of the boys started crying but she said, “You’re not allowed to do that to me.”

When she’d started school, her dad had shown her a waiver parents were asked to sign that permitted the use of corporeal punishment.

“My dad didn’t sign the form,” she told the principal.

Which was accurate. So instead she was put in the corner to watch, while each of the scared and teary-eyed boys were paddled in turn.

This, it turned out, was far, far worse.

7 thoughts on “the weeping willow”